Hello, yes…I am still alive! I’ve been holding back on a blog I wrote a few weeks ago until we got permission to use the photos; no joy yet so let’s just post it and I’ll add the photos later. So, here you go:

I write this fresh back from a trip to Sypnie Care Home, on what is a proper summer’s day , in very late September! About time eh? Bring it on!

It was a lovely morning with the staff and residents, spent in two of the courts provided for outdoor enjoyment for the residents. Pauline and all the staff had already spent plenty of time getting the space in lovely shape with many an ornamental plant – so time for the REAP posse to cruise in to ‘food it up’.

To start with we broke into two teams: half us of us – in little more than a blink of an eye – rustled up a 2 x 1 m raised bed and filled it with peat free compost, free top soil from the flood alleviation scheme and chicken manure pellets; and the other half planted a brace each of apple trees and blackcurrant bushes, giving a decent amount of space around them to grow into. We spent a bit of time looking at where the sun would be at different times of day and in different seasons and which plants might shade others (which could be a good as well as bad thing, say, in a hot summer). These are things people often forget and then regret afterwards….

We joined forces for the planting up (and seed sowing) in the raised bed with all sorts of hardy plants to grow into the autumn and beyond: oriental greens like mizuna, pak choi and ‘green in snow’ (the clue’s in the name!); a selection of classic brassicas such as spring cabbage and kale; aliums in the form of chives and onions; and the ever popular spinach and parsley. A smorgasbord to ‘cut and come again’ for the dinner table as the nights draw in. We put the longer lasting and/or taller plants where they wouldn’t shade the others from the precious autumn and winter sun.

What a lovely site this is, sheltered from the wind on all four sides but with plenty of sun due to its good size combined with the low height of the buildings around. A microclimate that is a growers’ paradise!

We finished off here by whacking in (not literally) a compost bin for their fruit and veg peelings, teabags, cardboard and shredded paper. We gave the lowdown on good practice and again we sited it carefully – in an area with plenty of sun to get the bin nice and warm and near to the building door to make it convenient for people to nip ‘oot to pop in their contributions.

We then trundled over to t’other court –  somewhat a different kettle of fish being much shadier and with stonier soil. But a lovely spot in its own right, very pleasant for quiet contemplation. Also there were a sheep, pig and chicken hanging out there – miniature plastic ones, (un)fortunately.   Blackcurrant bushes are quite amenable to the shade so in they went along with a few strawberries desperate to get in the ground. Let’s see how they go on in comparison to those in the other location – gardening is always an experiment. (I’m hoping they do well as I am a fiend when it comes to blackcurrants and strawberries and now I know the door code…)

A big thank you to the staff and to the residents – Peter, John and Fred amongst others mucked in as much as they could and supervised most excellently when the kneeling got too much. We look forward to coming back to see how it’s going! 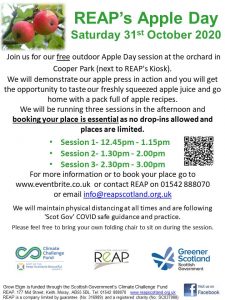 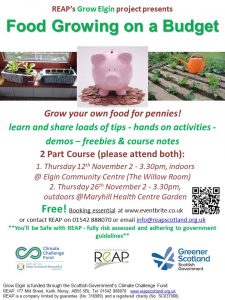 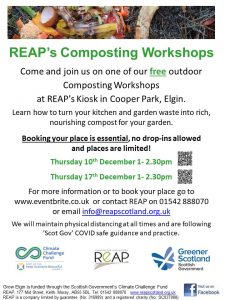 Join us for our free outdoor workshop and learn­ everything you need to know about composting! How to turn your kitchen and garden waste into rich nourishing compost for your garden at REAP’s Kiosk at[...]
View Calendar
Add
This site uses cookies More info