They say all good things come in threes. Or is that bad things? Or buses? Well, since the topic in question is my blog – with three in a couple of days, no less – then surely it is the former…well, the many thousands of people sending emails missing their fix and begging for their resumption can’t be wrong! In the previous two I have gone back in time to the balmy days of British Summer Time. However, in this one we’re firmly rooted in November, though strangely in weather more reminiscent of summer.

Sunglasses and shirtsleeves made an appearance during the glorious couple of days spent last week at Greenwards Primary, Bishopmill Primary and Elgin Academy. Dorothy, Lynne and I were joined by orchardier John Hancox, who had come up the A9 trunk road with a car jam-packed full of young fruit trees and shrubs, stakes, ties, guards, as well as an apple juice press and a selection of his apples. And a rather splendid spade I cast envious glances at, plus a mallet, for banging those stakes in.

Elgin Academy kindly provided the large array of spades and forks; plenty were needed as the kids were out in force to help us. There was no way we could have done without their help, with ten trees plus soft fruit shrubs to get in in each session! 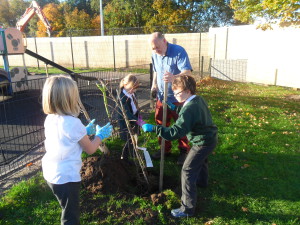 John and the Greenwards gang

Miss Bailey’s eco-schools group at Greenwards were first up on the Monday, a lovely bunch of little ‘uns, thirty or so of them, along with a crack team of student reporters. Lynne got them warmed up in her magic way and then they split into groups of three. We laid out the trees in rows so the lawn mower can navigate easily through to cut the grass. And we positioned them a good four metres apart – remember, although they are wee little things now they’ll grow a lot bigger and we don’t want two trees getting tangled or shading each other. Did you know – the final height that a fruit tree will grow to depends on the type of standard rootstock that it has been grafted on to? This will control the vigour of the tree, as well as potentially improving disease resistance. 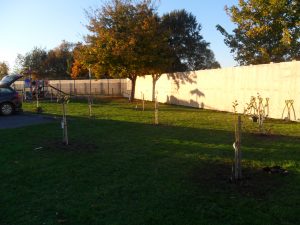 The apple trees are in place! 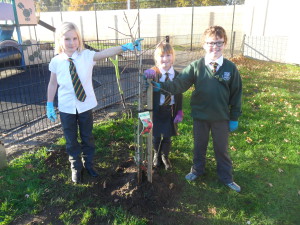 And so a rather nice, if we say so ourselves, fledgling orchard appeared right near the entrance, with a variety of apple trees suited to the Moray climate, such as Katy, Laxton’s Fortune and, yes, Beauty of Moray. The odd plum and pear tree provided a bit of variety, as did some young gooseberry, blackcurrant, redcurrant, tayberry and raspberry shrubs planted close to the trees to give them a bit of company.

The following morning we were at Bishopmill and an even bigger group of cute wee ones, led by Mr Stewart and Mr Stuart. We sited our orchard on a slope to the side of the school for the parents to see and near to their biodiverse play area, again with a selection of apples and other top fruit, plus a row of soft fruit bushes, next to the path. 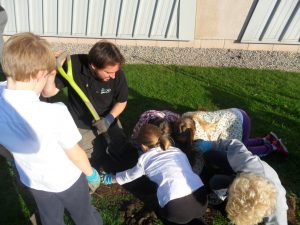 A pause as the Bishopmill worm hunt intensifies 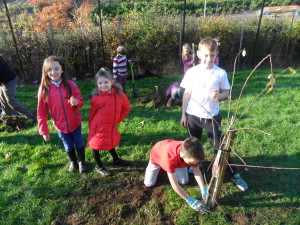 Applying the finishing touches (the camera does actually lie sometimes -it is actually vertical, honest)

Digging here was tricky near the bottom of the slope, where the soil was very stony, especially for wee ones, but they did a sterling job, whilst being careful to handle the tools safely. We were digging out a square about 80cm wide (half that size for the soft fruit), first putting the turves to one side, then digging further down and removing the soil to about a spade’s depth. Then we put the turves in the hole upside down; ‘why?’ you ask. Because the soil near the surface and the grass is rich with nutrients but we don’t want the grass to grow. Then we position the stake and the tree, before backfilling the hole with the remaining soil. 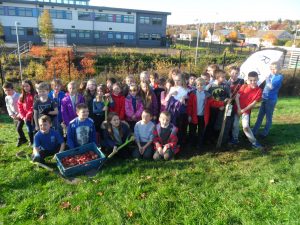 Bishopmill posse – look at the cameras!

The final shebang was after lunch, next door at Elgin Academy, where Mrs. Campbell’s class took to the field. Again we were on a slope, adding to the existing fledgling orchard which is part of their brilliant food garden, and facing stony soil in places. The teenagers did well and their stakes were well done, put in with some gusto. It’s important to have a stake in place for the early years of a tree, in order to support the wee thing against the wind and dreich weather. When we put a stake in, it’s not in the middle of the hole as that’s for the tree but close enough so that they can be tied loosely together with the special ties. And we must put a guard around the base of the tree to stop rabbits, deer and other pesky furry critters from munching the bark, otherwise it’s game over for the tree… 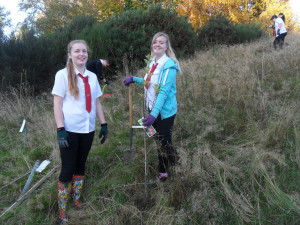 Up on the slope at the Academy

And did you know (I didn’t until John explained) that research has shown a square hole is better than a round hole? This is because the roots find it easier to grow into the corners of the un-dug (more compacted) soil.  There was just enough left in the Academy’s water butt to ensure the trees started their new life with a good drink. The trees should start producing fruit in the next couple of years, so not too long to wait. 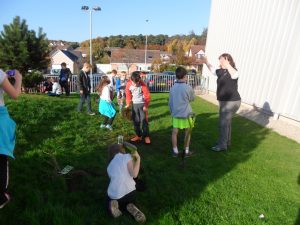 Lynne takes a breather to recount her fishing trip

As a small bonus for all the pupils, they got to have a go at using John’s stylish vintage apple press to get some juice; enough for a wee dram for everyone – so much better than your carton stuff!

It was fantastic to see all the pupils engaged in outdoors learning and planting trees for many in the future to enjoy and get healthy free food, and all on the school doorstep. Big thanks to you all – and your teachers – for your hard work and enthusiasm. And thank John! 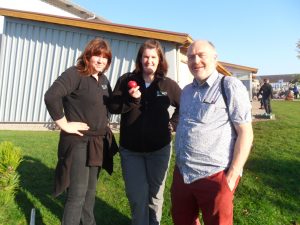 Good things do come in threes!

There are no upcoming events.